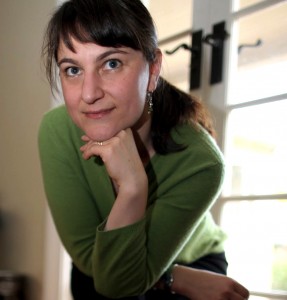 Adina West grew up surrounded by trees, on a remote property on Australia’s east coast, in country New South Wales.

“As a child, I was never afraid of the dark,” she says. “The night, for me, was filled with infinite possibility.”

Adina is from a large family, and she remembers how she and her siblings would come running when their mother took a loaf of her homemade bread out of the oven. “The pine kneading board my mother uses to make bread was brought to Australia by my European grandmother when she emigrated. We’d often finish the whole loaf while it was still warm. And we always fought over the crust, because it was crispy. It was the best bit.”

Adina wrote her first story at age eight. “I typed it up on my parents’ old typewriter,” she says. “I always knew I wanted to write stories.”

Though her subject matter may have matured, that desire has remained unchanged.

Adina spent most of her childhood curled up with a book, and her first teenage job was shelving books at the local library, where she was cautioned more than once for reading them instead of putting them away.

Now, Adina lives in Sydney’s leafy north-west with her IT guru husband, two children, and a couple of unwelcome possums who really don’t know how to take a hint. Books 1-3 of her paranormal fantasy series, Dark Child, are available now at all leading digital retailers from Pan Macmillan’s Momentum books. The Dark Child series is an eclectic mix of ancient and modern, tarot, astrology, suspense and romance, and she loves that writing it made watching Vampire Diaries necessary research.

Some random facts about Adina in no particular order:

• She occasionally drinks tea and coffee to be polite, but prefers rooibos. Or hot chocolate. Or chai (which doesn’t make much sense, because it has tea in it)

• At age nineteen she spent a memorable day wearing full Japanese kimono, including zōri (traditional sandals) and tabi (toe socks). They’re really not as comfortable as they look.

• She spent some years learning to speak (and write) languages like Japanese, Chinese and French. Unfortunately, that was so long ago she’s forgotten everything she learned. Though she still speaks French food. And can order at yum cha.

• She has a weakness for dahlias and old fashioned roses.

Back to home page