Well, the third title in the Dark Child series is well in progress – completed and with the editor as I write. It will be called Dark Child: Bloodsworn, and I’m very happy to have release dates to share with you! 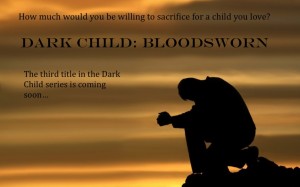 My publisher, Momentum, plan to serialise it as they did with my first two books, and it will also be released as an Omnibus (whole novel) with the episodes recombined for those who prefer to read it all in one go.

OR for the full version,

If you pop over to my author page on Facebook here, you’ll find plenty of inspiration pics I posted as I was working on this novel in the first half of 2015.

Keep an eye out for teasers from Bloodsworn that I’ll be posting on Facebook too as the release date gets closer. Or just when I can’t bear the suspense any more. IT’S KILLING ME!